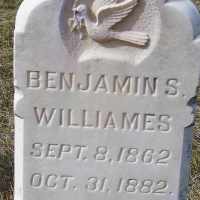 The Life Summary of Benjamin S.

Put your face in a costume from Benjamin S.'s homelands.

Due to the civil war the town in Ohio that Benjamin was born in was overrun with soliders. It was dangerous to live in. So Agnes (his mom) had to cross the Ohio River to escape it. Also turning this t …