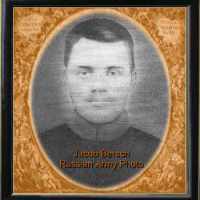 Jacob Bersch was born on 15 August 1872, in Russia as the son of John Bersch and Elizabeth. He married Catherine Kinderknecht about 1891, in Russia. They were the parents of at least 4 daughters. He lived in Kansas City, Wyandotte, Kansas, United States in 1920. He died on 26 January 1958, in Logan, Colorado, United States, at the age of 85.