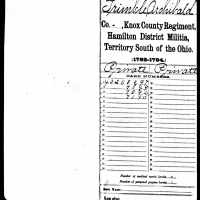 The Life of Archibald

On June 28, 1776, the Battle of Sullivan's Island takes place on Sullivan's Island, South Carolina. Since it is so close to Charelston, the battle is sometimes referred to as the First Siege of Charleston. This is the first time that the Americans had a victory against a land and sea attack by the British.
1786 · Shays' Rebellion

Scottish and northern Irish: variant of Trumble , recorded in northern Ireland since the 17th century.

There are no historical documents attached to Archibald.