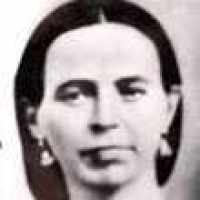 The Life Summary of Caroline Florence

When Caroline Florence Barker was born on 11 December 1838, in Framlingham, Suffolk, England, United Kingdom, her father, Samuel Barker, was 26 and her mother, Eliza Abbott, was 24. She married Edward Jonathan Palmer from 1852 to 1860, in England, United Kingdom. They were the parents of at least 6 sons and 3 daughters. She died on 10 November 1884, in Plain City, Weber, Utah, United States, at the age of 45, and was buried in Plain City Cemetery, Plain City, Weber, Utah, United States.

Put your face in a costume from Caroline Florence's homelands.

This biography was found among some genealogy papers that were in possession of my Aunt Mae Blanch. I do not know who the author of the biography was. The Life of my Grandfather and Grandmother Palme …