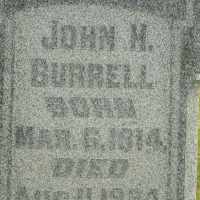 The Life of John Hanna

Put your face in a costume from John Hanna's homelands.

English, Scottish, and northern Irish: probably a metonymic occupational name for someone who made or sold coarse woolen cloth, Middle English burel or borel (from Old French burel, a diminutive of b(o)ure); the same word was used adjectively in the sense ‘reddish brown’ and may have been applied as a nickname referring to dress or complexion. Compare Borel .