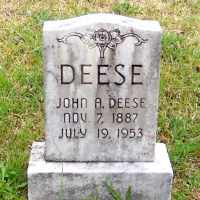 The Life of John Anglish

When John Anglish Deese was born on 7 November 1887, his father, Butler William Deese, was 21 and his mother, Teresa A Threat, was 15. He had at least 1 son and 2 daughters with Minnie Mae Tadlock. He lived in Monroe, Union, North Carolina, United States in 1953. He died on 19 July 1953, at the age of 65, and was buried in Smyrna United Methodist Church Cemetery, Monroe, Union, North Carolina, United States.

Put your face in a costume from John Anglish's homelands.

In 1897, Senator J.L. Hyatt introduced the woman suffrage bill in North Carolina. The bill did not make it past the committee.
1906 · Saving Food Labels

1 German: variant of Dees .2 Probably a variant spelling of Irish Dease or an Americanized spelling of German Diess ( see Dies ).