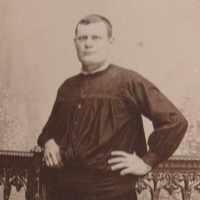 The Life Summary of Michel

When Michel Beltran Selma was born on 25 September 1890, in Chert, Xert, Castelló, Comunitat Valenciana, Spain, his father, Ramon Beltran Bonfill, was 37 and his mother, Dolores Joaquina Selma Cervera, was 33. He married Salvadore Beltran Sanz on 16 October 1915, in Chert, Xert, Castelló, Comunitat Valenciana, Spain. They were the parents of at least 1 son and 1 daughter. He died on 12 February 1960, in Verreries-de-Moussans, Hérault, Languedoc-Roussillon, France, at the age of 69, and was buried in Laval-Roquecézière, Aveyron, Midi-Pyrénées, France.

Put your face in a costume from Michel's homelands.

1892 · The birth of Catalonian politics

A proposal of Catalan constitution, called Bases de Manresa, was written in Catalonia, initiating the political movement of Catalanism, which is a movement that is relevant in present day.

There are no historical documents attached to Michel.