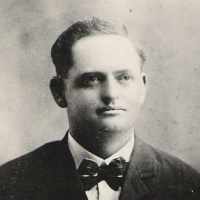 The Life of Isaac Newton

This is Grandpa Newt and Grandma Rhuie's wedding picture. They were married on August 29, 1901 in Indiana.