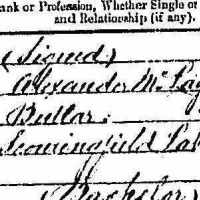 The Life of Alexander McLagan

Put your face in a costume from Alexander McLagan's homelands.

The Church Patronage Act 1874 was passed by Parliament and amended and altered the laws relating to the Appointment of Ministers to Parishes in Scotland. Paragraphs spelled out definitions to prevent the Act being subverted by processes used by Patrons and clarified that the Church of Scotland would decide on the qualifications required for Ministers.
1884

Art Nouveau Period (Art and Antiques).
1885 · Creation of the Secretary of State for Scotland.

The post of Secretary for Scotland was established in 1885 after the need arose after establishing different departments for the benefit of the communities.