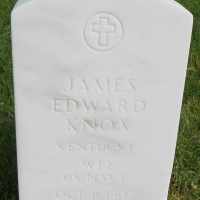 The Life of James Edward

Put your face in a costume from James Edward's homelands.

1 Scottish, northern English, and northern Irish: from a genitive or plural form of Old English cnocc ‘roundtopped hill’, hence a topographic name for someone who lived on a hilltop, or a habitational name from one of the places in Scotland and northern England named with this element, now spelled Knock, in particular one in Renfrewshire.2 The surname is also borne by eastern Ashkenazic Jews as an Americanized form of one or more likesounding Jewish surnames.