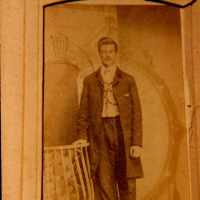 The Life of Stephen Bates

Put your face in a costume from Stephen Bates's homelands.

Due to the state’s financial crisis during the previous decade and growing criticism toward state government. Voters approve the Constitution of 1851 which forbade the state government from going into debt.
1876 · The First Worlds Fair in the U.S.

English and Scottish:1. status name, from Middle English yoman, yeman, used of an attendant of relatively high status in a noble household, ranking between a Sergeant and a Groom , or between a Squire and a Page . The word appears to derive from a compound of Old English geong ‘young’ + mann ‘man’. Later in the Middle English period it came to be used of a modest independent freeholder, and this latter sense may well lie behind some examples of the surname. 2. topographic name, an expanded form of Yeo .