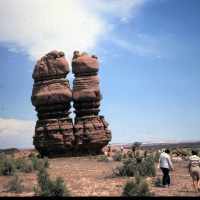 The Life Summary of Sidney Lorenzo

When Sidney Lorenzo Swasey was born on 15 September 1853, in El Dorado, California, United States, his father, Rodney Degrass Swasey, was 20 and his mother, Lura Loretta Scovil, was 21. He married Mary Rowe on 22 December 1878, in Mount Pleasant, Sanpete, Utah, United States. They were the parents of at least 2 sons. He lived in Utah, United States in 1870 and Castle Dale, Emery, Utah, United States in 1900. He died on 12 July 1907, at the age of 53, and was buried in Claresholm, Willow Creek No. 26, Alberta, Canada.

Put your face in a costume from Sidney Lorenzo's homelands.

English: Anglicized form of an unidentified surname, possibly German Schweitzer or Dutch Swijs, rare patronymic from Wijs ‘wise’ (see Wise ). The surname Swasey is no longer found in Britain. Compare Swayze , Swazey , Sweazy , Sweezey , and Swezey .History: The name was brought to North America by John Swasey, a Quaker who came from England to Salem, MA with two sons, John and Joseph, in or before 1640. Banished from Salem because of his religious beliefs, he moved first to Setauket, Long Island, NY, and subsequently to Southold, Long Island. His son Joseph, who remained in MA and inherited his estate at Salem, kept the surname form Swasey, while John, Jr, adopted the form Swayze.

http://www.sanrafaelcountry.com/sidsleap.html Both pictures of Sid's Leap taken in the 1970's before the bridge was destroyed. Photo credit to Don Swasey. Sid's leap is located high above the San R …