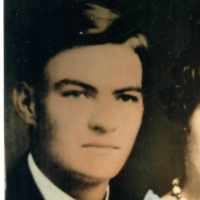 The Life of Vernon John

When Vernon John DeWitt was born on 6 September 1894, in Geneva, Fillmore, Nebraska, United States, his father, Albert Henry DeWitt, was 42 and his mother, Lillie Estella Andrew, was 25. He married Gladys "Glide" Clifford on 25 December 1916, in Fillmore, Nebraska, United States. They were the parents of at least 5 sons and 3 daughters. He registered for military service in 1917. He died on 11 May 1970, in Concordia, Cloud, Kansas, United States, at the age of 75, and was buried in Pleasant Hill Cemetery, Concordia, Cloud, Kansas, United States.

Put your face in a costume from Vernon John's homelands.

After the explosion of the USS Maine in the Havana Harbor in Cuba, the United States engaged the Spanish in war. The war was fought on two fronts, one in Cuba, which helped gain their independence, and in the Philippines, which helped the US gain another territory for a time.
1914 · World War I

On July 31, 1914 French socialist leader, Jean Jaurés was murdered. A few days later Germany starts plans to invade France. Britain then started to occupy France. The battles that took place in France were First Battle of the Marne, Gallipoli, Jutland, Battle of Verdun, Battle of the Somme, and the Brusilov Offensive. 25 percent of the allied military deaths that happened in World War I were from France. Between civilian and military deaths France lost 1,697,800 people and 4,266,000 were wounded.

German: habitational name from any of numerous places so named, for example in Altmark, Mecklenburg, and Saxony.

I, Margaret Estella Dewitt, was born 20 Jan. 1935, the youngest child of Vernon John Dewitt. My birthplace is Concordia, Cloud, Kansas. I was born in town on the 500 block west fifth street. Before I …