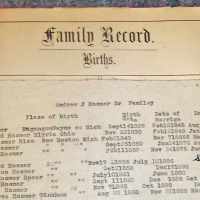 The Life of John Artemus

Put your face in a costume from John Artemus's homelands.

English: variant of Osmer with an inorganic initial H-.