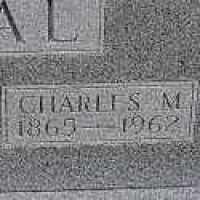 The Life of Charles Murt

Put your face in a costume from Charles Murt's homelands.

This Act was to restrict the power of the President removing certain office holders without approval of the Senate. It denies the President the power to remove any executive officer who had been appointed by the president with the advice and consent of the Senate, unless the Senate approved the removal during the next full session of Congress. The Amendment was later repealed.
1904 · The World's Fair of 1904

1 English, Scottish, and Irish: from an Anglo-Scandinavian form of the Gaelic name Niall ( see Neill ). This was adopted by the Scandinavians in the form Njal and was introduced into northern England and East Anglia by them, rather than being taken directly from Gaelic. It was reinforced after the Norman Conquest by the Anglo-Norman French and Middle English forms Neel, Nihel, and Nigel, which were brought to England by the Normans.2 Scottish and Irish: reduced form of McNeal ( see McNeil ).