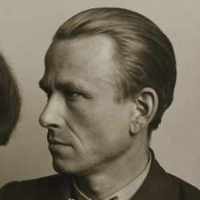 When Wilhelm Heinrich Otto Dix was born on 2 December 1891, in Reuß jüngere Linie, Thüringen, Germany, his father, Ernst Franz Dix, was 29 and his mother, Pauline Louise Amann, was 27. He had at least 1 son and 1 daughter with Martha Lindner. He died on 24 July 1969, at the age of 77, and was buried in Gaienhofen, Konstanz, Baden-Württemberg, Germany.

Put your face in a costume from Wilhelm Heinrich Otto's homelands.

Archduke Franz Ferdinand of Austria-Hungary and his wife were assassinated in Sarajevo, Bosnia-Herzegovina provoking World War I.