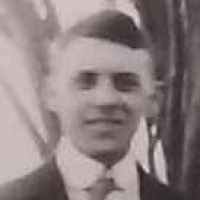 The Life of Clarence Eros

When Clarence Eros Hunt was born on 28 October 1894, in San Bernardino, San Bernardino, California, United States, his father, Charles Augustus Hunt, was 26 and his mother, Inga Cicilie Moldol, was 20. He married Pearl Louise Riesland on 23 May 1919. They were the parents of at least 3 daughters. He lived in Hemet, Riverside, California, United States in 1920 and Fragaria Election Precinct, Kitsap, Washington, United States in 1940. He registered for military service in 1919. He died on 14 April 1989, in Orofino, Clearwater, Idaho, United States, at the age of 94.

Put your face in a costume from Clarence Eros's homelands.

A landmark decision of the U.S. Supreme Court upholding the constitutionality of racial segregation laws for public facilities if the segregated facilities were equal in quality. It's widely regarded as one of the worst decisions in U.S. Supreme Court history.
1919 · The Eighteenth Amendment