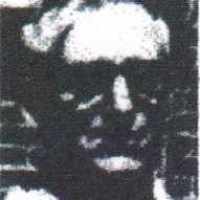 Put your face in a costume from Raymond Alphonse "Alphie" Joseph's homelands.

The Silver Dart was the first recorded flight in Canada. It took off from Baddeck, Nova Scotia, on February 23, 1909, and was piloted by John Alexander Douglas McCurdy.
1921 · Racing Schooner Launched

The Bluenose racing schooner was launched on March 26, 1921, in Lunenburg, Nova Scotia. It was evident that the ship was nothing like other ships that had been launched.
1945 · HMCS Esquimalt Torpedoed

On April 16, 1945, the HMCS Esquimalt was torpedoed by German U-Boats. Thirty-nine men died, some due to the attack others to exposure to cold. Those that survived were rescued by the Sarnia.

French: from the Germanic personal name Waldo (from waldan ‘to govern’).