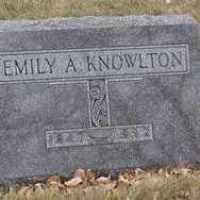 The Life Summary of Ellen Ann

Put your face in a costume from Ellen Ann's homelands.

English: nickname from Anglo-Norman French gal, gale, galle ‘cock, cockerel’.English: habitational name from a minor place called with either Middle English gale, gagel (Old English gagel) ‘bog myrtle’, or with Middle English gale ‘fishery paying dues to the lord’ (Old English gafol ‘tax’?) such as Gale in Bickington (Devon) and The Gale, the name of a fishery in Ham and Stone (Gloucestershire).English: topographic name from Middle English gale, gail (Old Norse geil) ‘ravine, narrow lane’, or a habitational name from a place so named such as Gale in Littleborough, Rochdale (Lancashire), or possibly High Gale in Tatham or Tunstall (Lancashire). With the sense ‘narrow lane’ it is found in several street names in medieval York.

Ellen Gale was born in England to Charles and Emily Gale. When she was 15 a missionary from the Church of Jesus Christ of Latter Day Saints converted some or all of the family and they came on board …