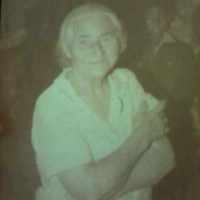 Pedrina Vieira Augustinho was born on 16 April 1910, in São Paulo, Brazil as the daughter of Jose Vieira Augustinho and Ana Maria Jesus. She married Lucio De Jesus in 1931, in Brazil. They were the parents of at least 3 daughters. She died on 13 July 1985, at the age of 75.

Put your face in a costume from Pedrina's homelands.

Galician and Portuguese:1. religious byname from Portuguese vieria ‘scallop’ (Late Latin veneria, a derivative of the name of Venus; the goddess was often depicted riding on a scallop). The scallop was a symbol of the pilgrim who had been to the shrine of Santiago de Compostela. 2. habitational name from any of numerous minor places called Vieiria.