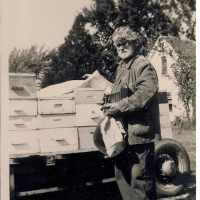 Kansas became the first state to adopt a constitutional amendment which prohibited all alcoholic beverages on February 19, 1881.
1900 · Gold for Cash!