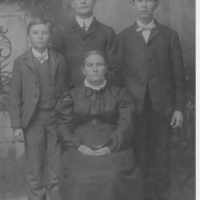 The Life of James Anton

Put your face in a costume from James Anton's homelands.

Under the direction of Governor Jim Hogg, Texas filed a lawsuit against John D. Rockefeller for violating state monopoly laws. Hogg argued that Standard Oil Company and Water-Piece Oil Company of Missouri were engaged in illegal practices like price fixing, rebates, and consolidation. Rockefeller was indicted, but never tried in a court of law; other employees of his company were convicted as guilty.
1904 · The World's Fair of 1904

St. Louis hosted the 1904 World's Fair and welcomed a crowd of 200,000 visitors on opening day of April 30, 1904. The fair had exhibits from 50 countries and 43 states. Several notable inventions showcased at the fair include iced tea and the ice cream cone. By the time of its closing in December 1904, over 20 million people had visited the fair.
1913 · The Sixteenth Amendment