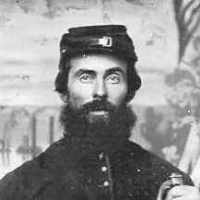 The Life of Peter Smith

Put your face in a costume from Peter Smith's homelands.

The Crimes Act was made to provide a clearer punishment of certain crimes against the United States. Part of it includes: Changing the maximum sentence of imprisonment to be increased from seven to ten years and changing the maximum fine from $5,000 to $10,000.
1832 · Calais Branch is Chartered

The State of Maine chartered the Calais Railway in 1832, one of the first railway charters to be granted by the state. Construction was very long, as the project was reorganized, abandoned, transferred to other companies, and extended several times. It was finally completed in 1898.
1847 · The Great Seal of the State of Iowa is made

1 English: metonymic occupational name for a grower or seller of beans, from Old English bēan ‘beans’ (a collective singular). Occasionally it may have been applied as a nickname for a someone considered of little importance.2 English: nickname for a pleasant person, from Middle English bēne ‘friendly’, ‘amiable’ (of unknown origin; there is apparently no connection with Bain or Bon ).3 Scottish: Anglicized form of the Gaelic personal name Beathán, a diminutive of beatha ‘life’.