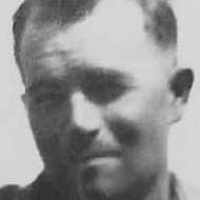 The Life Summary of George Lorne

When George Lorne Cosford was born on 26 August 1891, in Mount Forest, Wellington North, Wellington, Ontario, Canada, his father, George Allen Cosford, was 39 and his mother, Charlotte Carson Boothe, was 31. He married Bertha Gladys Munroe in October 1919, in Regina, Saskatchewan, Canada. They were the parents of at least 1 daughter. He lived in Saskatchewan, Canada in 1916 and Long Lake, Kennebec, Frontenac, Ontario, Canada in 1926. He died on 8 March 1971, in Viking, Beaver County, Alberta, Canada, at the age of 79, and was buried in Viking, Beaver County, Alberta, Canada.

Put your face in a costume from George Lorne's homelands.

English: habitational name from either of two places called Coleford, in Somerset and Gloucestershire, which are named with Old English col ‘(char)coal’ + ford ‘ford’.