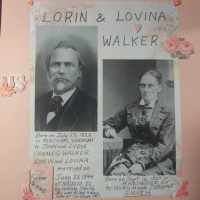 The Life Summary of Lovina

Put your face in a costume from Lovina's homelands.

Crossing the plains was an adventure for an 11-year-old girl. Her history says that she rode in the wagon and she may have part of the time, but generally the pioneers walked, it was much more comfor …