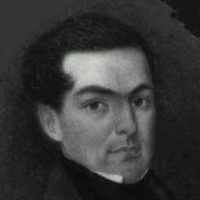 The Life of Thomas Harding

When Thomas Harding Ellis was born on 6 September 1814, in Campbell, Virginia, United States, his father, Charles Ellis, was 42 and his mother, Margaret Keeling Nimmo, was 24. He married Euphemia Clairborne "Fanny" Taylor on 27 April 1848. They were the parents of at least 1 son and 1 daughter. He lived in Chicago, Cook, Illinois, United States in 1880. He died on 11 April 1898, at the age of 83, and was buried in Richmond, Virginia, United States.

Put your face in a costume from Thomas Harding's homelands.

With the Aftermath of the Napoleonic Wars the global market for trade was down. During this time, America had its first financial crisis and it lasted for only two years.
1833 · The Town of Chicago is Founded

Chicago became an incorporated town after the Potawatomi Native Americans and the United States Government signed the Treaty of Chicago. The name comes from the indigenous word shikaakwa meaning onion, or something similar, because of the wild garlic that grew abundantly in the area.
1836 · Remember the Alamo