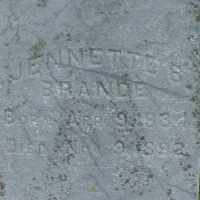 The Life of Janette 'Nettie'

Put your face in a costume from Janette 'Nettie''s homelands.

By 1829 Venus, Illinois had grown sufficiently and in 1832 was one of the contenders for the new county seat. However, the honor was awarded to a nearby city, Carthage. In 1834 the name Venus was changed to Commerce because the settlers felt that the new name better suited their plans. But during late 1839, arriving members of the Church of Jesus Christ of Latter-day Saints bought the small town of Commerce and in April 1840 it was renamed Nauvoo by Joseph Smith Jr., who led the Latter-Day Saints to Nauvoo to escape persecution in Missouri. The name Nauvoo is derived from the traditional Hebrew language. It is notable that by 1844 Nauvoo's population had swollen to around 12,000 residents, rivaling the size of Chicago at the time. After the Latter-Day Saints left the population settled down toward 2,000 people.
1856 · The Largest Map Company in the World

1 English: habitational name from any of various places called Brandon, in County Durham, Northumbria, Norfolk, Suffolk, Warwickshire, and elsewhere. Most are named with Old English brōm ‘broom’, ‘gorse’ + dūn ‘hill’. One in Lincolnshire, however, may be named with the Brant river, on which it stands; Ekwall derives the river name from Old English brant ‘steep’, presumably with reference to its steep banks.2 Irish (Kerry): Anglicized form of Gaelic Mac Breandáin ‘son of Breandán’.3 French: from the Old French oblique case of the personal name Brand, of Germanic origin ( see Brand 1).