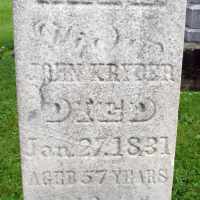 When Anna Storm was born on 27 November 1773, in Union, Lancaster, Pennsylvania, British Colonial America, her father, Christian Storm, was 23 and her mother, Margareta Smith, was 20. She married Esq. John Kryder III in 1791, in Buffalo Valley, Union, Pennsylvania, United States. They were the parents of at least 5 sons and 5 daughters. She died on 27 January 1831, in Plain Township, Stark, Ohio, United States, at the age of 57, and was buried in Henry Warstler Cemetery, Plain Township, Stark, Ohio, United States.

"""At the end of the Second Continental Congress the 13 colonies came together to petition independence from King George III. With no opposing votes, the Declaration of Independence was drafted and ready for all delegates to sign on the Fourth of July 1776. While many think the Declaration was to tell the King that they were becoming independent, its true purpose was to be a formal explanation of why the Congress voted together to declare their independence from Britain. The Declaration also is home to one of the best-known sentences in the English language, stating, “We hold these truths to be self-evident, that all men are created equal, that they are endowed by their Creator with certain unalienable Rights, that among these are Life, Liberty and the pursuit of Happiness."""""""
1789

1 English, North German, Dutch, and Scandinavian: nickname for a man of blustery temperament, from Middle English, Middle Low German, storm, Old Norse stormr ‘storm’.2 Dutch: name given to a child born at sea during a storm.