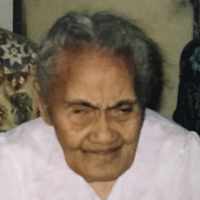 The Life of Fisihone Susana Mapa

When Fisihone Susana Mapa Uasi was born in 1913, in Lakepa, Tongatapu, Tonga, her father, Tevita Tamale Fisilau, was 33 and her mother, Mele Sulifa Vailahi, was 35. She married Falisi Uasi in 1935, in Pangai, Ha'apai, Tonga. They were the parents of at least 3 sons. She died on 19 September 2006, in Auckland, North Island, New Zealand, at the age of 93.

Put your face in a costume from Fisihone Susana Mapa's homelands.

There are no historical documents attached to Fisihone Susana Mapa.