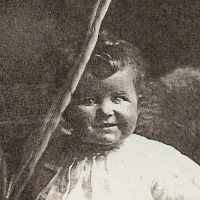 The Life of Winifred Margery

Put your face in a costume from Winifred Margery's homelands.

U.S. intervenes in World War I, rejects membership of League of Nations.
1927

Dutch and German: from a short form of the female personal name Gertrude, composed of the Germanic elements gēr ‘spear’ + trud ‘strength’, the latter being subsequently reinterpreted as traut ‘dear’, yielding the form Gertraut ( see Draudt ).