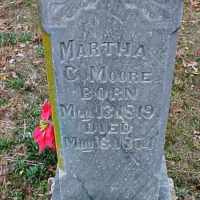 The Life of Martha Caroline

Put your face in a costume from Martha Caroline's homelands.

The Missouri Compromise helped provide the entrance of Maine as a free state and Missouri as a slave state into the United States. As part of the compromise, slavery was prohibited north of the 36°30′ parallel, excluding Missouri.
1830 · Trail of Tears

In the 1830's, President Jackson called for all the Native Americans to be forced off their own land. As the Cherokee were forced out of North Carolina many of them hid in the mountains of North Carolina.
1835 · The Hermitage is Built