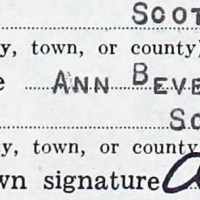 Scottish: probably from Middle English beverage ‘drink’ (Old French bevrage, from beivre ‘to drink’). The term was used in particular of a drink bought by a purchaser to seal a bargain, and the surname may have been acquired as a nickname in this context. Reaney adduces evidence that suggests that the nickname may have been bestowed on a man who made a practice of getting free drinks by entering into bargains which he did not keep.