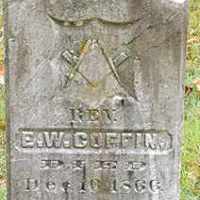 The Life of Ezekiel Walker

Put your face in a costume from Ezekiel Walker's homelands.

Caused by war veteran Daniel Shays, Shays' Rebellion was to protest economic and civil rights injustices that he and other farmers were seeing after the Revolutionary War. Because of the Rebellion it opened the eyes of the governing officials that the Articles of Confederation needed a reform. The Rebellion served as a guardrail when helping reform the United States Constitution.
1805

English and French: metonymic occupational name for a basket maker, from Old French cof(f)in ‘basket’ (Late Latin cophinus, Greek kophinos). The modern English word coffin is a specialized development of this term, not attested until the 16th century.