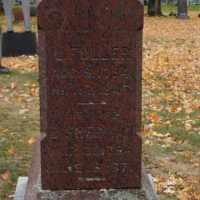 The Life of Lemuel Samuel

When Lemuel Samuel Fuller was born on 9 August 1794, in Bradford, Orange, Vermont, United States, his father, Lemuel Fuller, was 37 and his mother, Elana Eleanor Gibbs, was 33. He married Betsey Sherman on 23 February 1817, in Lisbon, Grafton, New Hampshire, United States. They were the parents of at least 6 sons and 4 daughters. He registered for military service in 1813. He died on 7 November 1845, in Granby, La Haute-Yamaska, Quebec, Canada, at the age of 51, and was buried in Granby, La Haute-Yamaska, Quebec, Canada.

Put your face in a costume from Lemuel Samuel's homelands.