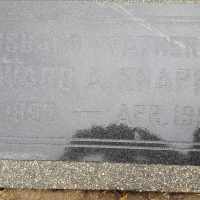 The Life of Adam Edward

When Adam Edward Knapp was born on 16 November 1891, in Waterville, Le Sueur, Minnesota, United States, his father, Joseph Knapp, was 39 and his mother, Margaret Dewald, was 37. He married Grayce Margaret king in 1921. They were the parents of at least 1 daughter. He lived in Newark, Marshall, South Dakota, United States for about 10 years and San Bernardino, San Bernardino, California, United States in 1930. He registered for military service in 1919. He died on 2 April 1951, at the age of 59.

Put your face in a costume from Adam Edward's homelands.

1 German: occupational name or status name from the German word Knapp(e), a variant of Knabe ‘young unmarried man’. In the 15th century this spelling acquired the separate, specialized meanings ‘servant’, ‘apprentice’, or ‘miner’.2 German: in Franconia, a nickname for a dexterous or skillful person.3 English: topographic name for someone who lived by a hillock, Middle English knappe, Old English cnæpp, or habitational name from any of the several minor places named with the word, in particular Knapp in Hampshire and Knepp in Sussex.