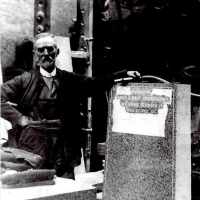 Garfield was shot twice by Charles J. Guitea at Railroad Station in Washington, D.C. on July 2, 1881. After eleven weeks of intensive and other care Garfield died in Elberon, New Jersey, the second of four presidents to be assassinated, following Abraham Lincoln.
1885 · Creation of the Secretary of State for Scotland.

The post of Secretary for Scotland was established in 1885 after the need arose after establishing different departments for the benefit of the communities.
1900 · Gold for Cash!

Scottish (also Braidfoot): from Old English brād ‘broad’ + fōt ‘foot’, probably a descriptive nickname but in some cases possibly a topographic name for someone who lived at the foot of a mountain.