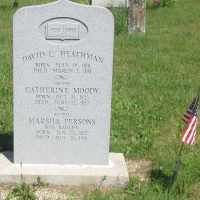 English and Irish: nickname for a courageous, arrogant, or foolhardy person, or one quickly moved to anger, from Middle English modie ‘impetuous’, ‘haughty’, ‘angry’ (Old English mōdig ‘brave’, ‘proud’, from mōd ‘spirit’, ‘mind’, ‘courage’). This English name has been established in Ireland since the late 13th century.