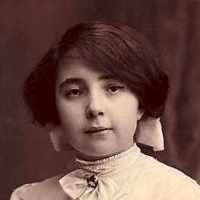 The Life of Dorothy Alice

When Dorothy Alice Clayton was born on 18 November 1893, in Macclesfield, Cheshire, England, her father, Thomas Clayton, was 45 and her mother, Kate Whittaker Ford, was 39. She married Godfrey Lindstrom on 20 May 1919. She immigrated to Ellis Island, New York City, New York, United States in 1914 and lived in Heswall, Cheshire, England, United Kingdom in 1901 and Lewisville, Jefferson, Idaho, United States in 1920. She died on 11 November 1924, in Salt Lake City, Salt Lake, Utah, United States, at the age of 30, and was buried in Murray Cemetery, Murray, Salt Lake, Utah, United States.

Put your face in a costume from Dorothy Alice's homelands.

After three prior attempts to become a state, the United States Congress accepted Utah into the Union on one condition, that all forms of polygamy were to be banned. The territory agreed, and Utah became a state on January 4, 1896.
1902 · So Much Farm Land

I was born September 25, 1896 -- Macclesfield, Cheshire, England. The 10th child of Thomas and Kate Whittaker Ford Clayton. I don't know much about my father's family. Mother was one of 15 children …