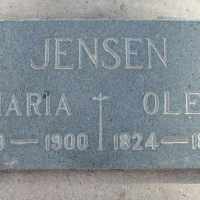 The Life Summary of Oluf

When Oluf Jensen was born on 3 March 1824, in Långtjärn, Värmland, Sweden, his father, Jon Olsson, was 32 and his mother, Ingebor Jonasdotter, was 30. He married Maria Bengtsdotter on 17 April 1854, in Gräsmark, Värmland, Sweden. They were the parents of at least 1 son and 3 daughters. He lived in Copenhagen, Denmark in 1870. He died on 28 August 1876, in Richfield, Sevier, Utah, United States, at the age of 52, and was buried in Richfield City Cemetery, Richfield, Sevier, Utah, United States.

Put your face in a costume from Oluf's homelands.

A Sketch of the Lives of Ole Jensen and Maria Olsen (As Narrated by Their Granddaughter, Effie Dunn)

My grandfather, Ole Jensen, was born March 4, 1824 at Grasmark, Vesmlan Sweden. My grandmother was born June 23, 1829 at Vernland, Sweden. Grandmother learned how to spin, weave, and knit when she wa …