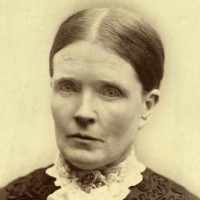 When Mary Ellison was born on 11 July 1830, in Altrincham, Cheshire, England, United Kingdom, her father, John Ellison, was 35 and her mother, Mary Goulden, was 29. She married John Evans on 25 December 1854, in St. Louis, St. Louis, Missouri, United States. They were the parents of at least 6 sons and 3 daughters. She lived in Bowdon, Cheshire, England, United Kingdom for about 11 years and Chicago, Cook, Illinois, United States in 1880. She died on 6 December 1915, in Bountiful, Davis, Utah, United States, at the age of 85, and was buried in Salt Lake City, Salt Lake, Utah, United States.

Mary Ellison was born July 11, 1830 in Altrincham, Middlewich, England. She was the daughter of John Ellison and Mary Goulden Ellison, who were of English decent. Her father was a Gardner by trad …