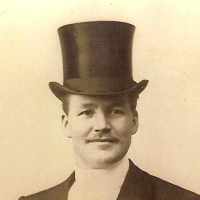 The Life Summary of Angus Emanuel

Put your face in a costume from Angus Emanuel's homelands.

Jewish (Ashkenazic) and German: habitational name from the city of Berlin, capital of Germany. This city takes its name from a West Slavic word meaning ‘river rake’, a scaffold of beams built over a river to prevent logs from jamming; the river in question is the Spree. Folk etymology, however, has put a bear into the arms of the city, as if the name were derived from Bärlin, a diminutive of Bär ‘bear’. The German name is also found in the Hamburg area, where it may be derived from the village of the same name, but of uncertain origin, in Holstein. In some cases the Jewish name may be a patronymic from a pet form of the Yiddish personal name Ber (see Berenson ), formed with the Slavic possessive suffix -in.

I am James F. Berlin, grandson to Angus and Ida Berlin through their son Clyde Elliott Berlin. I am in possession of many letters which primarily my grandfather wrote to my grandmother beginning in 19 …