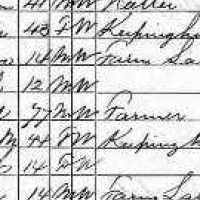 The Life Summary of Mary Rebecca

Put your face in a costume from Mary Rebecca's homelands.

Americanized form of French Barteau .Americanized form of Italian Berto , and possibly also a shortened (and altered) form of some surname beginning with Barto- or Berto-.Hungarian (Bartó): from a short form of the personal name Bartalan, an archaic variant of Bertalan, from Latin Bartholomaeus (see Bartholomew ). The surname Barto of Hungarian origin is also found in Croatia (see also below).