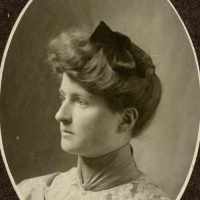 The Life of Pearl Painter

When Pearl Painter Card was born on 2 April 1884, in Logan, Cache, Utah, United States, her father, Charles Ora Card, was 44 and her mother, Sarah Jane Painter, was 26. She married William Reid Sloan on 14 December 1904, in Logan, Cache, Utah, United States. They were the parents of at least 3 sons and 1 daughter. She lived in Cardston Alberta Temple, Cardston, Cardston, Alberta, Canada in 1906. She died on 5 September 1965, in Portland, Multnomah, Oregon, United States, at the age of 81, and was buried in Portland, Multnomah, Oregon, United States.

Put your face in a costume from Pearl Painter's homelands.

1 English: metonymic occupational name for someone who carded wool (i.e. disentangled it), preparatory to spinning, from Middle English, Old French card(e) ‘carder’, an implement used for this purpose.2 Reduced form of Irish McCard .

Never too Busy to Listen to the Spirit