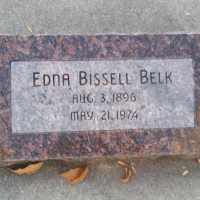 The Life of Edna

After the explosion of the USS Maine in the Havana Harbor in Cuba, the United States engaged the Spanish in war. The war was fought on two fronts, one in Cuba, which helped gain their independence, and in the Philippines, which helped the US gain another territory for a time.
1904 · Hobble Creek Hydroelectric Power Plant

The Hobble Creek Hydroelectric Power Plant was completed in 1904. Many poles and wires were installed to bring power into the town and its homes. The plant is still in operation today.
1917