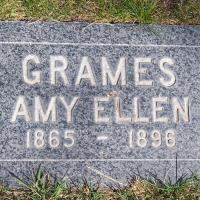 The Life Summary of Amy Ellen

Put your face in a costume from Amy Ellen's homelands.

Possibly an altered spelling of German Gramm(e)s, from a short form of the personal name Hieronymus.