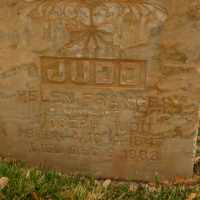 The Life Summary of Helen Frances

Put your face in a costume from Helen Frances's homelands.

The Treaty of Guadalupe Hidalgo was signed on February 2, 1848, which ended the Mexican-American War. Mexico ceded 525,000 square miles of land, including what is now California. Gold had been found at Sutter’s Mill in Coloma, California, only nine days prior to signing the treaty.

Some characteristic forenames: Irish Brendan, Bridie, Declan, Eamon, Kieran, Liam, Brian Patrick, Conor, Cormac, John Patrick, Nuala, Siobhan.English: principally from the Middle English and Old French personal name Joce, Josse, Joice, a Romance form of Old Breton Iuthoc, a pet form of a name in Iuth- ‘lord’ with the hypocoristic suffix -oc. Joce became popular as a personal name, especially in medieval Picardy, Artois, Normandy, and Flanders, through the cult of Saint Josse. According to legend, he was the brother or son of the 7th-century Breton king Judhael (see Jewell ), and gave up his inheritance to become a hermit in the place recorded in the 8th century as Sanctus Jodocus, now Saint-Josse-sur-Mer, near Étaples in Pas-de-Calais. The cult was promoted in the second half of the 8th century by the Frankish king Charlemagne, and was brought to England (Winchester) in the early 10th century by refugees from Saint-Josse, the centre of the cult, but use of the personal name in England is not known until after the Norman Conquest. Middle English Joce also was sometimes used as a female name (as Joyce is in modern times) and this may have also given rise to a surname.English: sometimes a variant of Goss , from the ancient Germanic personal name Gozzo, Gauz, which often became Joce, Joice, Joss(e) in Old French. It was frequently used as a short form of Goscelin or Joscelin (see Joslin ).

Brief History of Samuel Judd Senior His Son Joseph Judd and Their families Samuel Judd, the father of Joseph Judd, was born in Cubbington, Warwick county England on 10 July 1820. He was the son of Tho …