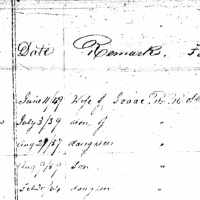 The Life Summary of Joseph Reeves B

Put your face in a costume from Joseph Reeves B's homelands.

Joseph Reeves Robbins was born in Recklesstown, Burlington, New Jersey to Isaac Rogers and Mary Ann Shinn Burtis Robbins on 18 October 1839. He was seven years old when they immigrated to San Francis …