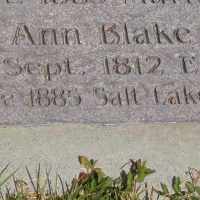 English and Scottish (England and central Scotland): variant of Black 1, meaning ‘swarthy’ or ‘dark-haired’, from a byform of the Old English adjective blæc, blac ‘black’, with change of vowel length.English: nickname from Middle English blak(e) (Old English blāc) ‘wan, pale, white, fair’. In Middle English the two words blac and blāc, with opposite meanings, fell together as Middle English blake. In the absence of independent evidence as to whether the person referred to was dark or fair, it is now impossible to tell which sense was originally meant.English (Norfolk): nickname from Middle English bleik, blaik>, blek(e) (Old Norse bleikr) ‘pale or sallow’ (in complexion).