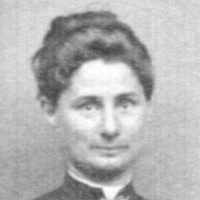 The Life Summary of Alice Cecelia

Put your face in a costume from Alice Cecelia's homelands.

English: topographic name for someone who lived below a wood on a hillside, from Middle English under + wude, wode ‘wood’, or a habitational name for someone from any place so named.History: Joseph Underwood emigrated from England to Watertown, MA, in 1637. William Underwood came from England to Concord, MA, before 1640, later settling in Chelmsford, MA. In VA, the name was established by Thomas William Underwood, who came from Norfolk, England, in 1675.

In 1983 a post office was established in Fairview with William J. Underwood as the first postmaster, serving until 1890. The Underwoods had a blacksmith shop at the west end of the town. Cecelia Und …