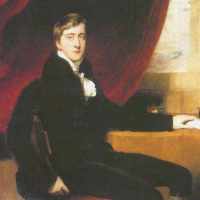 When William George Spencer Cavendish 6th Duke of Devonshire was born on 21 May 1790, in Paris, Seine, France, his father, William Cavendish, was 41 and his mother, Georgiana Spencer, was 32. He died on 18 January 1858, at the age of 67, and was buried in Edensor, Derbyshire, England, United Kingdom.

Put your face in a costume from William George Spencer's homelands.

The reign of terror took place after the French Revolution. It claimed somewhere between 18,500 - 40,000 lives. The government at the time was exercising a more dictatorial form of government. The terror started with the execution of Marie Antoinette and ended with the fall of Robespierre.

English: habitational name from a place in Suffolk named Cavendish, from an Old English byname Cāfna (meaning ‘bold, daring’) + Old English edisc ‘enclosed pasture’. Cavendish is the surname of the Dukes of Devonshire. They are descended from Sir John Cavendish, who served as Chief Justice of the King's Bench (1372–81). Under the Tudors and Stuarts, a succession of shrewd and powerful heads of the family achieved political prominence and became extremely wealthy. William Cavendish, 2nd Earl of Devonshire, was a strong supporter of the ‘Glorious Revolution’ of 1688 and of William of Orange (William III) against James II. In 1694 he was created Duke of Devonshire. The Latin family motto, Cavendo tutus ‘safe through taking care’ is a pun on the surname.Manx: Anglicized form of Corjeag, a shortened form of Mac Quartag ‘son of Svarteygr’ (from Old Norse, meaning ‘black-eyed’). Folk etymology interpreted Corjeag incorrectly as Manx curjeig ‘alms-dish’ and equally incorrectly supposed that the surname Cavendish was a synonym meaning ‘giving-dish’. Manxmen's familiarity with the English surname presumably led to the substitution.